Redwood is a beautiful, long-lasting solution for your deck, fence, landscaping, garden structure or other outdoor project. Few other building materials display the combination of beauty, warmth, durability and versatility inherent in real redwood. Redwood is also an all natural, renewable resource. The rich color of redwood is legendary. Every redwood board is unique, one-of-a-kind. Such distinction cannot be matched by man-made, alternative products.

The beauty and warmth of real redwood speaks for itself. Additionally, redwood is inherently durable. Redwood heartwood is naturally resistant to insects and decay. Redwood has excellent “dimensional stability,” which means that it shrinks and swells less than other woods when exposed to water.

Wood acts like a sponge. When it absorbs moisture it swells and when it loses moisture it shrinks. Redwood has thinner cell walls which shrink and swell less than other woods, making it less likely to warp, split, cup or check. This means more beautiful, longer lasting structures.

Every day we grow more than we harvest

Redwood is a renewable, recyclable and biodegradable resource. The forestlands, manufacturing, and distribution operations of Mendocino Redwood are certified to the standards of the Forest Stewardship Council® (FSC®). An independent, non-profit organization, FSC is an open, membership-led organization that sets standards under which forests and companies are certified. FSC certification and standards are among the world’s most stringent.

Mendocino Redwood products are grown and harvested with an eye toward long-term sustainability. Logs are harvested at levels consistently below our forests’ annual growth rate. Seedlings are replanted at a 7:1 ratio. Millions of dollars are invested annually in ongoing forestry operations to help mitigate impacts on habitat, plant, and animal species.

An all natural product, Mendocino Redwood can be recycled throughout its useful life. Redwood Bark and Chips are widely used for soil amendments, landscaping, and other, high value uses. Used redwood deck and fence boards are routinely upcycled to find new life as planters, furniture, privacy screens, and many other, creative uses. When used Mendocino Redwood structures come to the end of their useful life, the wood naturally biodegrades and re-enters the earth from whence it came. 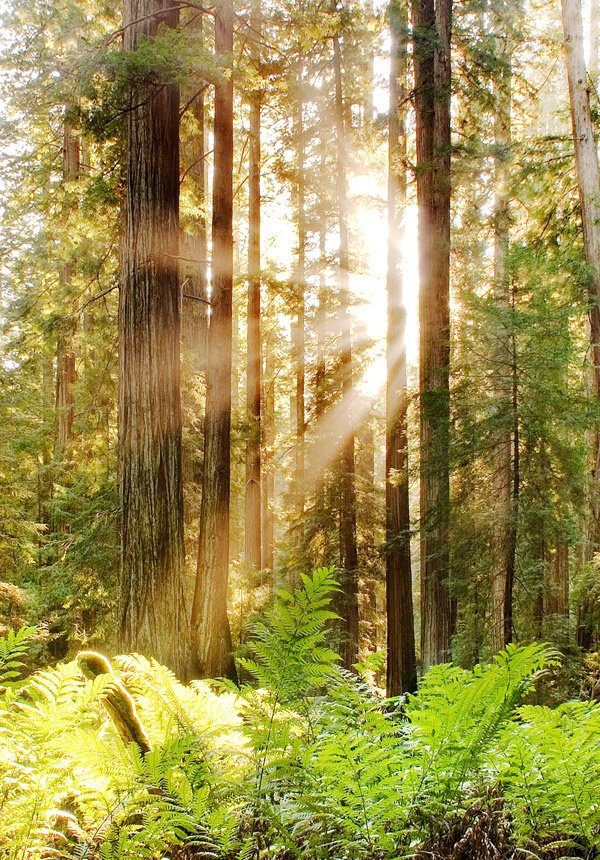 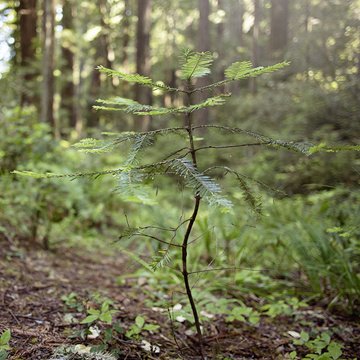 Greenhouse gases, such as carbon dioxide, trap heat in the atmosphere, and are considered a primary cause of climate change and global warming. Scientists agree that reducing greenhouse gases is an important way to address these pressing issues.

Managed redwood forests are actually very effective at removing carbon dioxide from the air, thereby helping to reduce greenhouse gases. Because trees absorb carbon dioxide from the atmosphere as they grow, a fast-growing species like redwood makes a big impact. Through the process of photosynthesis, carbon is absorbed into the wood fibers and oxygen is released back into the air. This is known as carbon sequestration.

Even as redwood trees are harvested and made into the lumber, the carbon remains sequestered in the wood. The average redwood deck holds about a half-ton of carbon; wood is 50% carbon by weight.

Redwood meets California’s most recent and strict fire codes. Thoroughly tested and found to be safe, redwood has earned Class B compliance and is safe to use in California’s Wildland-Urban Interface (WUI) areas. You may also download the Redwood Decking Meets Wildland Fire Standards brochure about redwood’s fire compliance.

Because we continue to grow more trees than we harvest year-after-year, the net amount of carbon sequestered each year increases. This continued cycle of carbon removal and storage is a crucial process in reducing greenhouse gases. 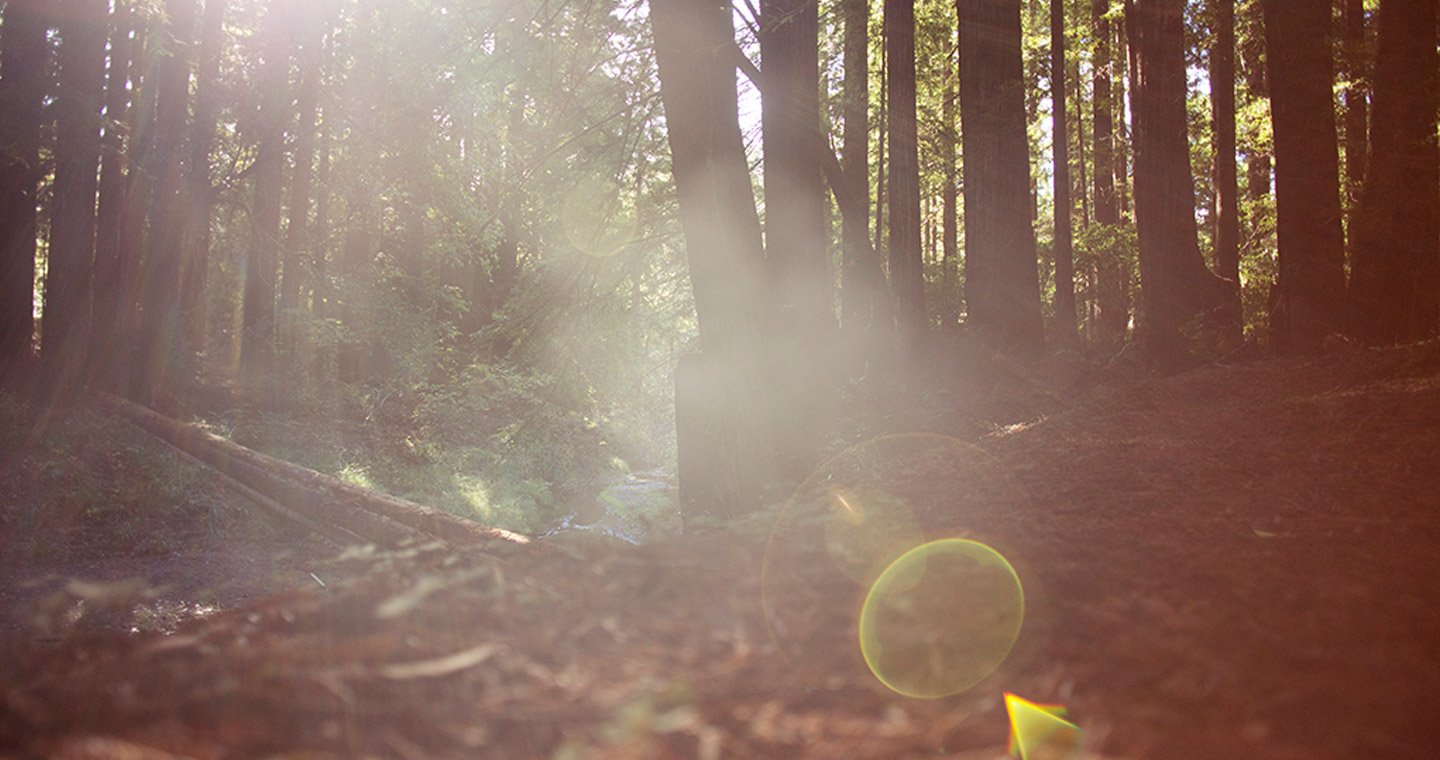 There are two domestic species of trees that are commonly referred to as redwoods: the coast redwood (Sequoia sempervirens), and Giant sequoia (Sequoiadendron giganteum).

Redwood trees get their common name from their bark and heartwood, both of which are a dark, reddish-brown color. Redwood heartwood is found in the inner portion of the tree and contains high tannin levels. In addition to tannins, redwood trees contain other chemicals which impart resistance to insects and fungal disease. 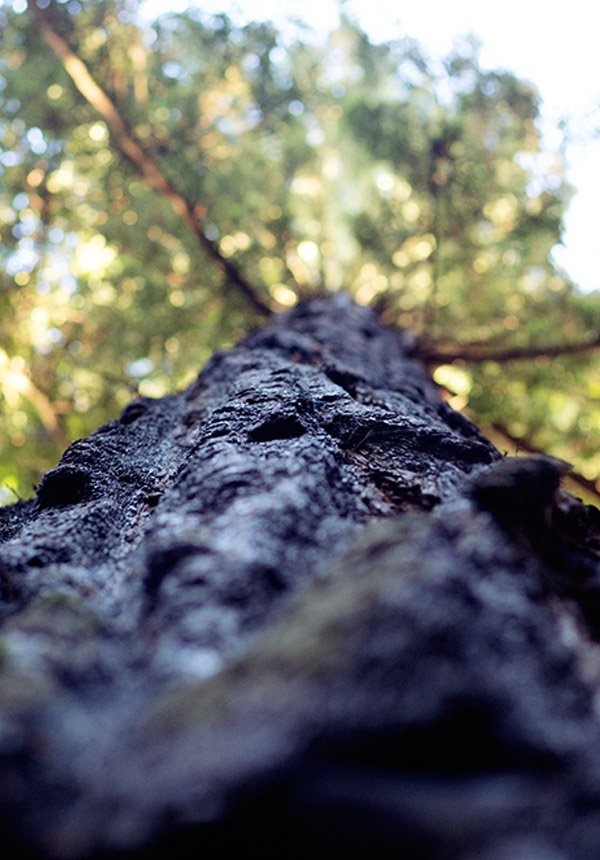 Coast redwood trees grow in the summer fog belt that stretches from central California north to the Oregon border.

Coast redwood trees may live for more than 2,500 years. In addition to their long lifespan, coast redwoods have the ability to regenerate in a few ways; they may sprout from seed, and young trees may also sprout from their parent’s roots.

The coast redwood is also tolerant to flooding and their bark is resistant to fire. 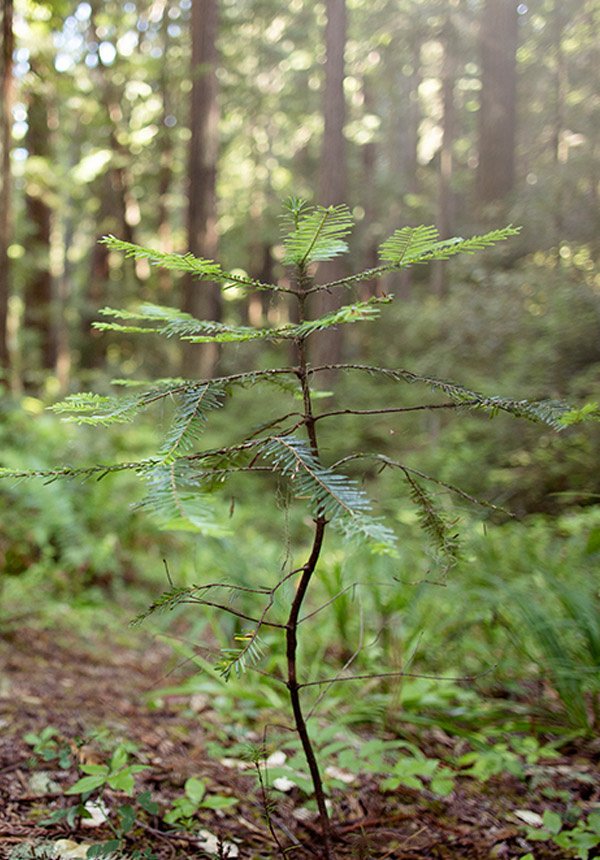 The habitat of the coast redwood is a climate where rainfall is typically around 60 inches per year. Eighty percent of this rainfall occurs during the six months between November 1 and April 30.

Topography varies from sea level to about 3,000 feet, and is marked by steep, narrow canyons. The slopes on which coast redwood trees grow commonly rise 50 to 70 feet or more per 100 feet.

Soils of the redwood region have mostly been formed on sandstones and shales, and to a lesser extent on slate, chert, limestone and schist. 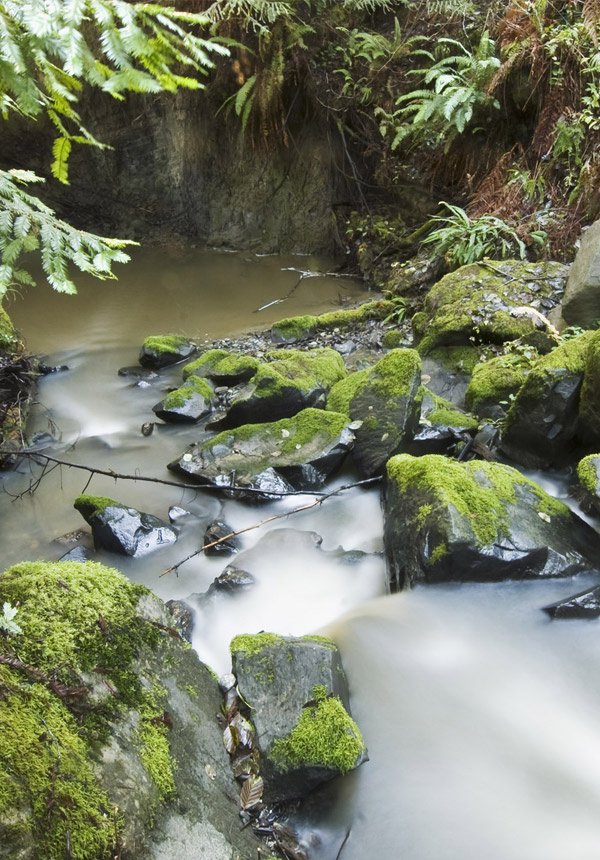 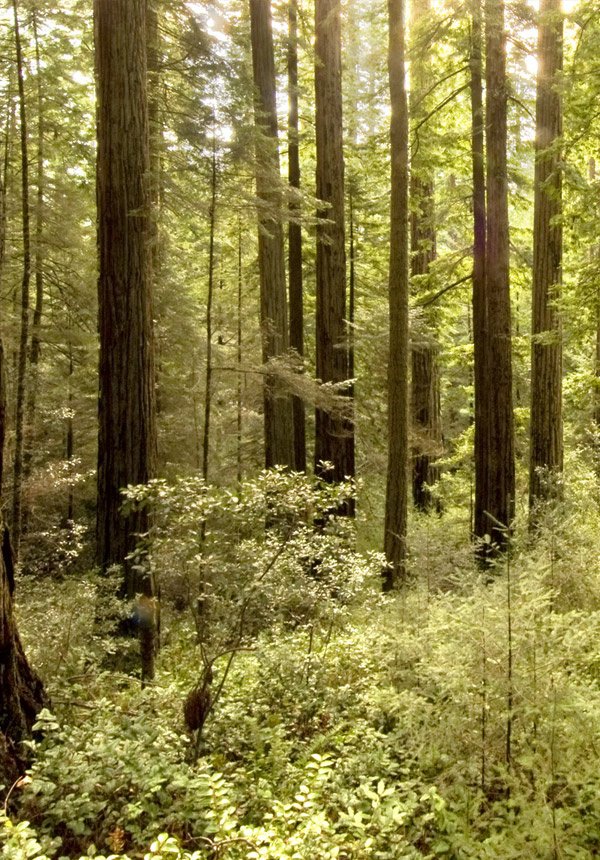 The history of redwood is as interesting and engaging as the magnificent trees themselves. For the past several thousand years, redwood forestlands have been an important part of the history of Northern California. The oldest redwood trees standing today began as seedlings more than 2,000 years ago!

The California Gold Rush, which began in 1848, forever changed the history of redwood. As thousands of people flooded into the state, there was increasing demand for housing, furniture and other goods. Much of that demand was filled by readily available redwood. The Transcontinental Railroad, built between 1863 and 1869, required vast amounts of lumber, much of it redwood. Once the railroad was built, further markets were opened and demand for redwood continued to advance.

As the American economy continued to grow, redwood was used extensively. This put further pressure on redwood logging practices. In some cases, short-term financial gain was more important than long-term loss of productive, healthy forestlands.

The history of redwood again changed dramatically in the decade known as Redwood Summer. Beginning in the summer of 1990, environmentalists clashed with timber companies in Northern California. Tensions eased in 1999 when Senator Dianne Feinstein (D-California) brokered a deal to permanently protect one of the last large blocks of 7,500 acres of pristine, old growth redwood stands in the state.

Today, second-growth redwood forests are growing and thriving. Forestry practices in California are some of the most stringent in the world, and new redwood growth now meets or exceeds the amount harvested each year. 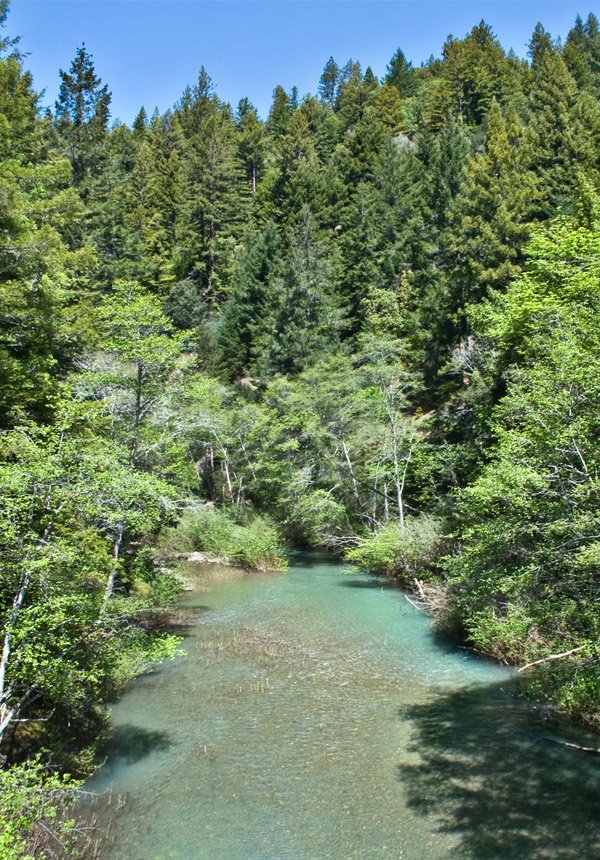 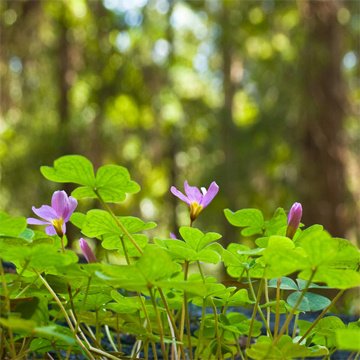 ⚠️ WARNING: Drilling, sawing, sanding or machining wood products can expose you to wood dust, a substance known to the State of California to cause cancer. Avoid inhaling wood dust or use a dust mask or other safeguards for personal protection. For more information go to www.P65Warnings.ca.gov/wood.