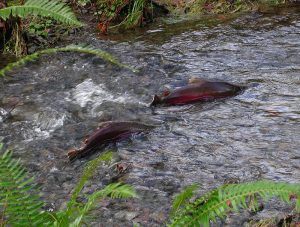 The fishing industry is worth $1.5 billion in California, but it has been long under threat for a bevy of reasons. The rapid post-war development throughout the Golden State was one massive factor in starting the rapid decline in the size of California’s fisheries. The ongoing California drought is another reason why many of the once ubiquitous species of fish are endangered and are close to disappearing altogether.

Not that the state of California has turned a blind eye to the problem. True, the fishing sector is a tiny one when the state’s entire economy is measured, but it is one important to many rural communities as both commercial and recreational fishing is the lifeline for many small towns and remote areas. To that end, California has invested at least a quarter billion dollars in habitat restoration over the past decade in an attempt to revive fish species including steelhead trout and several varieties of salmon.

But the latest drought still poses a threat to California’s fish. One species, the coho salmon, was once a large part of the state’s salmon industry. But starting in the 1970s, their numbers rapidly dwindled, and only 1 percent of the species’ historic population exists. While conservationists have done an admirable job trying to revive the coho, they are on the losing end of this fight. In Northern California, the growth of marijuana farms is siphoning off water that would have otherwise sufficed for salmon habitat.

If species such as the coho have even a fighting chance of surviving in California, then the efforts of companies such as the Mendocino Redwood Co. (MRC) are important.

MRC manages about 350 square miles (907 square kilometers) of forestland in “treehugger” country, Mendocino and Sonoma counties. These lands are slathered in coastal redwoods and Douglas firs. Its sister company, Humboldt Redwood Co. (HRC), manages about the same amount of land farther north, in uber-treehugger country. Both companies have promised to be better stewards of these forests than the lands’ previous owners, which had scored permits for clear-cutting some of its acreage years earlier. MRC and HRC have promised transparency, more selective cutting and adopting measures that are more ecological in order to produce long-term sustainable timber supplies.

One program-involved land surrounds Greenwood Creek in Mendocino County, one of the many watersheds that fall on MRC’s land. In the late 19th century, a dam was built at the creek’s mouth. Industrial logging through the 20th century further damaged the local ecosystem, and an area once home to schools of coho salmon became bereft of the species.

The biggest problem was that the creek and streams feeding into the waterway had become ridden with sediment. To that end, MRC partnered with various state agencies and other organizations to reduce the amount of sediment in over 225,000 acres, which the company says resulted in 17,000 cubic yards (13,000 cubic meters) of sediment diverted from Greenwood Creek.

As a result, coho salmon have returned to the area. The local press has reported sightings of 60 to 70 young salmon in streams from which they had been absent for 50 years. Meanwhile the coho salmon population in Mendocino County almost quadrupled between 2010 and 2013, when latest figures are available. The coho are not out of the woods yet — but they are returning to these woods in Northern California, and are offering hope that the California fishing industry can not only survive, but thrive in the long run.

This article was originally posted on Triple Pundit.