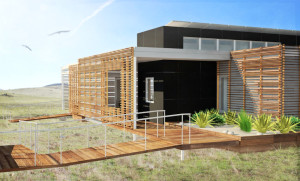 A multidisciplinary team of students and faculty from across 12 different majors at California Polytechnic University (Cal Poly) in San Luis Obispo are competing in the U.S. Department of Energy Solar Decathlon 2015. Named INhouse, the project is a net zero home, one in which the energy the home consumes is offset by renewable energy sources on-site, including solar panels and landscape irrigation from captured storm runoff. INhouse features 1,000-square-feet of interior living space and a 700-square-foot exterior patio area.

Featuring a contemporary California aesthetic, Forest Stewardship Council® (FSC®) certified Redwood is prominently featured in the exterior of the home, including on the exterior screen around the walls and on the deck. Untreated, the Redwood will gradually patina to a silver-gray color. As pieces of the screen and deck are replaced, the Redwood can be reused in other applications or chipped up for landscaping mulch.

The U.S. Department of Energy Solar Decathlon challenges collegiate teams to design, build, and operate solar-powered houses that are cost-effective, energy-efficient, and attractive. The winner of the competition is the team that best blends affordability, consumer appeal, and design excellence with optimal energy production and maximum efficiency. The Solar Decathlon occurs biennially. The 2015 competition features 17 teams from across the U.S. and includes participating universities from Europe, Asia, and South America.

Cal Poly’s INhouse design has recently been featured in a number of press outlets.

Learn more about the U.S. Department of Energy Solar Decathlon.

Learn more about the INhouse project.